March 4th is designated as International HPV Awareness Day to raise awareness about the importance of vaccination against the Human Papilloma Virus. HPV is primarily responsible for cervical and other skin and mucosal cancers. The Day was inaugurated by the International Papillomavirus Society in 2018, becoming the focal point of the annual campaign for many organisations seeking to increase awareness and education worldwide about HPV and HPV-related cancer prevention. 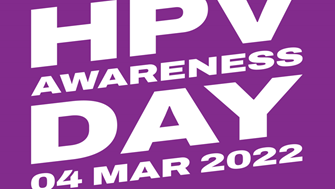 Infections caused by Human Papilloma Virus (HPV) are one of the most common infections transmitted mainly through direct (usually sexual) contact with an infected individual. In most cases the infection is asymptomatic and the virus is eliminated by the immune system before a pathogenic effect develops. However, the infection can sometimes result in a persistent viral disease that manifests in a variety of lesions (including cancerous lesions) of the skin and mucous membranes. In fact, the human papilloma virus directly affects four out of five people, and although most people who come into contact with it may never experience symptoms. Due to its high prevalence, the cancer it can cause claims nearly half a million lives worldwide each year from all backgrounds, nationalities and genders.

Public Health can now avail of essential prevention tools for the fight against HPV, such as cervical screening, which is necessary for the early detection of possible neoplasms and precancerous forms related to HPV, and preventive vaccination as a primary prevention measure.

In particular, as far as screening activities are concerned, the Pap smear is the examination that identifies precancerous or cancerous lesions in the cervix. Today, screening programmes in Italy actively offer a free test every three years to all women between the ages of 25 and 64. On average, two out of three women adhere to the invitation, and although too many still shy away, data indicate a growing awareness. Women over the age of 30 are now offered the HPV test, a test similar to the Pap smear, but which detects the presence of viral DNA and thus lengthens the period between check-ups. In fact, women who are not infected with HPV can extend the interval between check-ups (if the virus is present, check-ups are arranged in consultation with the doctor).

An organised cervical screening service is in place in northern Sardinia, which involves performing Hpv DNA tests in women with positive cytology for cervical dysplasia.

The screening activity is based on a strong synergy between hospital and local facilities. The service, in fact, makes use of a multidisciplinary pool of professionals from the University Hospital of Sassari (AOU-SS) and the Sassari Local Health Authority (ASL) who carry out various actions. On the one hand, there is the Screening Service, headed by Dr Antonio Genovesi, and the Family Advice Bureau (Consultorio familiare), led by Dr Roberto Pietri. On the other, the various units of the AOU in Viale San Pietro, starting with the Pathological Anatomy Unit, directed by Professor Antonio Cossu, which has been identified as the reference laboratory for cytological analysis. Then there is the Molecular Epidemiology Laboratory, headed by Professor Andrea Piana, which is part of the Hygiene and Hospital Infection Control Directorate and performs molecular analyses aimed at finding high-risk HPV DNA. The analyses carried out in the laboratory are able to identify women at greater risk of developing cervical neoplasia in advance of the cytological examination and, in the event of a negative result, to repeat the screening less frequently (every five years), with considerable savings in resources. In addition to these facilities, the Obstetrics and Gynaecology Department, under the direction of Professor Giampiero Capobianco, is responsible for in-depth level III diagnostics in the case of virus-positive patients with cervical dysplasia. Otorhinolaryngology, headed by Professor Francesco Bussu, is the reference centre for HPV-related head and neck diseases. Then there is Dermatology, led by Professor Maria Antonietta Montesu, which deals with malignant or benign lesions caused by the virus.

As far as primary prevention measures are concerned, the fact that the virus responsible for the disease has been identified with such great precision in oncology has made it possible to develop the most effective preventive tool: the HPV vaccine.

In Italy, the 2017-2019 National Plan for Preventive Vaccination provides for vaccination to girls and boys in their eleventh year of age: currently available are quadrivalent vaccine and, since 2017, a 9-valent vaccine that prevents infection by 9 different serotypes of Papillomavirus. In this regard, the importance of extending vaccination to very young males is emphasised, as, in addition to directly preventing the pathological manifestations of the genital apparatus of those vaccinated, also enables more rapid control of the pathology in females due to a reduced circulation of the virus and can prevent extragenital HPV-related tumours for which there is currently no possibility for screening. Vaccination is offered at the outpatient clinics of the Public Hygiene Services of our ASLs.

However, in spite of these important weapons of defence against the Papilloma virus and the sequelae caused by its infection, there are still numerous obstacles to be tackled both as regards the implementation of essential screening and vaccination programmes and as regards information and health education aimed at raising awareness among the most susceptible groups, such as young adolescents.

At a time when the entire population, but particularly the younger cohorts, after so many months of social isolation imposed by measures to contain the SARS-CoV-2 infection, have seen an increased need for human contact, it is extremely important to increase protection for all infectious diseases preventable by vaccination, including HPV infection.

#onelessworry, is the slogan for the Campaign launched on 4 March 2022 to overcome these barriers and raise awareness about HPV and the strategies to put in place to reduce and/or lower the risk of disease.

On this important occasion, Vaccinarsinsardegna.org, sharing the objectives of the #onelessworry campaign led by the International Papillomavirus Society in collaboration with over 100 clinical, research, professional and patient organisations worldwide, reaffirms even more fervently the importance of health education and vaccination communication. These latter are essential to tackle the stigma attached to the disease, which still represents a dangerous barrier to be broken down, especially in reaching an audience as difficult to intercept as that of adolescents and young adults towards whom HPV vaccination is mainly directed.

“If we implement HPV vaccination and screening of women throughout the world we can eliminate cervical cancer!”

Keep in touch with our website so as not to miss any further updates.